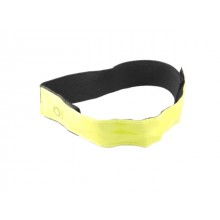 A pair of hi-viz iluminated armbands made with reflective material and 4 red LED's.

Velcro fastening versatile LED armband which is ideal for joggers, cyclists, children and horse riders to name but a few applications for those who want a small, high performance armband that benefits both from LEDs that have a flashing and constant on function as well as a highly reflective material.

A large LED armband which benefits from a wider reflective surface area and brighter LED's when compared to many others available on the market.

It can be worn as an armband or ankle band and has applications for horse riders and equestrian safety, it's also Ideal for walkers, cyclists, makes a great LED armband for joggers, site workers such as banksmen, road workers etc...

Approximately 6-8 hours of use can be obtained from its single, easy to replace CR232 battery and with fluorescent reflective material this LED band can be seen at distances of up to 200M.

A one click action turns the 4 LEDs on and off and also controls the settings with the armband having rapid flash and constant on operational modes.


Your Review: Note: HTML is not translated!

Enter the code in the box below: