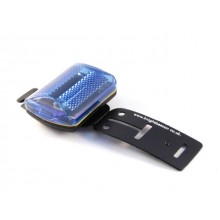 Blue LEDs and our unique multi-clip allow this personnel safety light to be deployed on uniform equipment loops, belts and even uniform buttons - NOTE if you wish to attach to a Klickfast docking point please look at the KB01 with fixed Klickfast Docking Stud.

Costing considerably less than most other police personal safety lights you will find its performance outstanding both in terms of the amount of light it emits and battery life duration.

With 5 LED's and 5 operating modes you have a police light unit that does not rely on a single source of light output, this means it has a high degree of  built in redundancy, the unit does not become useless should one or even two LED's become damaged during operational deployment an important consideration if comparing against units wth fewer LED's.

Furthermore each LED is mounted horizontally and slightly offset, this means that light is sent in more directions making the unit visible through a wider angle than similar products where often the light is vertical and the LED's set in s striaght line - neat to look at but not as visible.

The KB01 emergency services light is in use with many of the UK’s police authorities which includes the countries largest force the Metropolitan Police, Essex Police, South Wales Police Authority and many more.

More than 300 hours of continuous use was obtained using a single pair of batteries when the blue Knight Light was independently tested by the West Midlands police force with the light on its maximum flash setting! With 5 settings performance can be optimised to suit the circumstances of its deployment and maximise battery life

Bicycle mounting brackets and suction cups offer options unique to the KB01 they can be attached to just about anything that would benefit from a blue LED hazard warning light particularly if using the KB01 model with the Klickfast Stud which allows the light to be paired with Klickfast accessories that can fix the light to signposts, vehicles etc.

The unique button hole aperture on the plastic clip allows the police light to be attached to police clothing, buttons on jackets or shirts, ideal for plain clothes police operations. Fixing holes allow the use of suction cups, plastic ties, studs, tacks, nails or pins offering superb levels of flexibility as to where the light can be utilised.


Your Review: Note: HTML is not translated!

Enter the code in the box below: